Mixology Monday has rolled around once again! We’ve just passed the solstice, so summer is officially here. The heat has been building for quite some time, however, and it’s due to last for at least two more months. No doubt these factors led Thiago, of Bartending Notes, to select Pineapple for our monthly mixing theme. After all, what fruit evokes more memories of seaside summer refreshment than the pineapple?

Let’s bring the king of fruits back! After being canned, mixed with all sorts of sugary liquids and blended into… some 80s dreadful cocktails, the pineapple needs more respect! Once a symbol of hospitality, the King of Fruits might be know misunderstood. One of the greatest non-citrus souring agents, used for crazy garnish ideas, infusions, old gum syrup flavoring, the pineapple is a fruit to be reckoned. Be in a tiki cocktails, an old school classic like the Algonquin, a crazy flavor pairing or just mixed in a delicious Verdita, get creative and make a cocktail using any part of this delicious, juicy fruit or share you favorite pineapple cocktail with us!

For the home bartender who’s not decimating these spiky fruit for a party crowd or a large family, dealing with fresh pineapples can be a bit of a chore. Juicing the things is time consuming and messy for those not in possession of a food processor or juice extractor (such as myself) , and pineapple juice spoils very quickly. I never manage to go through the big cartons of Dole pineapple juice (about the best alternative to fresh you can get), and the stuff in the cans picks up an awful metallic flavor that all but ruins any cocktail you use it in. What to do?

Enter Jeffrey Morgenthaler. An inspiration for us cocktail bloggers for quite some time, Morgenthaler has just released The Bar Book, a technique-focused tome that is organized along the process of mixing a drink. Leading off with tools and the procurement of ingredients, Morgenthaler eases into a section on the making of certain components of your drink-to-be. One such critical component is, of course, syrup, and among those syrups discussed by Morgenthaler are compound syrups, and among those compound syrups is exactly the thing what I’m after: pineapple syrup.

One frequently sees drinks calling for pineapple juice or pineapple syrup — most of them faux tropicals — but, being a bit lacking in fruit-whacking ambition, I often passed them by, leaving it to the Tiki bloggers and bartenders to deal with the spiky fruit. Morgenthaler’s methods and a determination to get back into the monthly MxMo swing of things convinced me to conduct an experiment involving the stubborn summer staple, however. So, in order to lengthen the lifespan of the juice as long as possible, I decided to mix up my first-ever batch of pineapple syrup. In actual fact, it’s quite a simple affair, though like all things made with care, it will take some time — about half a day, minimum.

First off, find yourself a pineapple. You don’t need a huge one, just a fresh one. As Morgenthaler notes, pineapples are picked when ripe, so you should use them right away — no need for them to sit around on a countertop. Ideally, the flesh of the fruit should be firm but have a slight give to it when squeezed. It should also be redolent of pineapple when smelled through the thick skin (a bit tricky if the fruit is stored chilled, as I’ve seen in a number of markets — the chill seems to deaden the smell).

Next up, make a batch of 1:1 simple syrup. You’ll need about 12 ounces or so to make use of a 1 pound pineapple. You’ll also need to procure a few simple tools: a couple mixing bowls and something to cover them, a large, fine mesh strainer (preferably a “double” strainer that consists of two interlocking mesh bowls), the obvious chef’s knife, and a sterilized bottle and funnel. 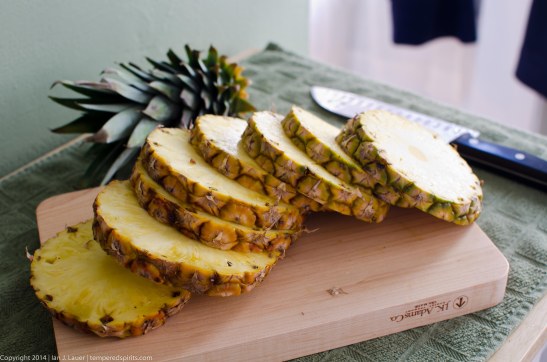 Ok, time for pineapple prep. First, twist off the leaves in a bunch, then chop off the “caps” on either end of the fruit. Slice the pineapple into sections a about 3/4 of an inch thick, then trim to thick skin off each section. Chop those section into wedges or chunks as wide as they are thick, discarding any especially tough bits of the core.

Now you’re ready to macerate. Toss the chunks into a glass bowl or large container, then pour the simple syrup over them ( they should be completely covered by the syrup). All you have to do now is cover the container and chuck it in the fridge for anywhere between 4 and 24 hours, letting the syrup soak up the pineapple juice. Any longer, and the fruit won’t be contributing much to the final syrup.

Once the infusion is complete, pour the syrup and pineapple chunks into a fine mesh strainer and into another container or bowl. Using a muddler or wooden spoon, press and mash the pineapple chunks to extract as much juice as you can from them. If you’re using a double mesh strainer, the final result will be very clear and free of pulp. Bottle it and it will keep for a week or so. I added a shot of vodka to extend the shelf life by a few weeks.

One last point: early in his chapter on syrups, Morgenthaler mentions that when using fresh fruit he finds it best to simmer the fruit in water to extract its flavor, strain out the pulp, then add sugar to create a syrup. Makes sense, as none of the sugar will be collected by the macerating fruit, giving you greater control of the sweetness level of the finished syrup. If you use this method for pineapple syrup, Morgenthaler recommends lightly mashing the pineapple prior to simmering it — it’s a very fibrous fruit, and the more you break it up, the more juice — and the more flavor — you can extract. Why Mr. Morgenthaler varies his method in his primary pineapple syrup recipe is a bit of a mystery, but let me tell you, it still works very well.

Ok, so — you have your syrup, now what to do with it? Though it’s calling out to be used in batches of rum drinks during poolside soirées, or perhaps in punchy mezcal and tequila drinks, I opted to stick to a more classic route. First up is the drink that inspired Morgenthaler himself to mix up pineapple syrup, a Cuban concoction from the 1930s called the Hotel Nacional Special…

Shake all ingredients with ice and fine strain into a chilled coupe. Garnish with a lime wheel placed on the rum of the glass.

From Eric Adkins of the Slanted Door in San Francisco, via The Bar Book by Jeffrey Morgenthaler.

A complex sour-type drink, the Special added fresh pineapple juice to the basic Daiquiri formula of rum and lime while switching out the sugar for apricot brandy. The drink was the house special of the grand Hotel Nacional, the prime time destination for a pre-revolutionary Cuba flooded with wealthy Europeans and American tourists escaping from the grips of Prohibition.

The above recipe is a modified formula (the original is found in Charles H. Baker’s The Gentleman’s Cocktail Companion) given to Morgenthler by Eric Adkins of The Slanted Door in San Francisco. The recipe swaps out the pineapple juice for syrup while reducing the amount of apricot brandy, upping the lime juice, and adding a hint of bitters to compensate for the extra sweetness. The end result is a tart, mouth-coating drink that emphasizes the flavor of the rum and the pineapple (which contributes that velvety feel and a bit of froth); it is just on the border of being over-sweet. That being the case, make your rum a fairly dry one from the Spanish side of the tropics, like Flor de Caña from Nicaragua (which I always prefer to Bacardi). If you’re outside the U.S., use a Cuban rum like Havana Club and toast the eventual lifting of our embargo. While Morgenthaler and Adkins call for aged rum, most original recipes call for the younger, unaged stuff. Either will work — I actually like to take a page from the Tiki playbook and blend the two, marrying the fresh brightness of the young rum and with the caramel, oak and spice from the older one.

As a counterpart to the sweet, sour-style Nacional, I went with a much older, boozier concoction found in David Wondrich’s Imbibe: the East India Cocktail. The recipe varies depending on its source — the earliest is found in Harry Johnson’s Bartender’s Manual, while the main variation is the use of raspberry syrup instead of pineapple — but this is one of the classic iterations:

Stir with ice and strain Into a chilled coupe. Garnish with the lemon twist.

Being a heavily modified “fancy” cocktail popular in the late 1800s, the East India swaps out simple or gomme syrup for a more complex blend of sweeteners, giving it a quirky, antiquated flavor profile — a dry blend of fruit-filled flavors accented by little acerbic tinges of baking spices and dried herbs. Though very little pineapple syrup is used here, its flavor is quite evident. One of the primary characteristics of pineapple is that its flavor can cut through those of other ingredients, often overpowering them, so it has to be used sparingly. In the East India, it is perfectly balanced with the curaçao and maraschino, all of which are used to amp up, thicken, and sweeten the brandy while being kept in check by the bitters and lemon peel. Speaking of bitters, Boker’s Bitters have been back on the market for some time, but if you find yourself without them, try Jerry Thomas’s Own Decanter Bitters from The Bitter Truth or, failing that, your household aromatic bitters, like Scrappy’s (go easy if using Angostura — they’re the gold standard, but here they can be overpowering and bit too bold).

So, there you have it: two classic uses of a slightly esoteric fruit syrup. Seeing as both of the above cocktails use a rather small quantity of the stuff, I’ll have ample syrup left over for experimentation. I’m thinking rum and mezcal…though we’ll see what my fellow bloggers manage to mix up for this coming Monday.

Photos and text by IJL.