Yes, the time has finally come to make some homemade spirituous infusions! I’ve been lagging behind in this area quite a bit, though I have a number of recipes and experiments I’d like to try (Amer Boudreau, anybody?).

First up in the infusion category, however, will be spiced rum. Why, you may ask? Well, the fifth meeting of the Heron Social Club in January will surely feature rum, and as the hosts have informed me of a penchant for the spiced variety, and since they’ve made both wine and beer at home, a bit of spirit-modification is called for. My first batches will serve as prototypes for that evening, and we’ll work from there.

“Combine everything in a large jar and seal. Keep in a cool, dark place for a couple of days, shaking it once a day to distribute the ingredients. Start tasting it after 48 hours; adjust ingredients if necessary, and once you feel it’s done (probably no longer than 4 days altogether), strain and bottle.”

Batch #1 was made, as you can see in the picture, with Appleton Estate Extra 12-year, which came as a surprising recommendation on Paul Clarke’s part, at least in my opinion. Appleton Extra is one of my favorite rums, and already rather rich and flavorful, though the amount of spice called for in the recipe certainly adds extra depth to it. Still, I felt like the vanilla and cinnamon were a bit lost in the mix, so I upped the amount to two vanilla beans and two cinnamon sticks (3-inch-long), which seemed to help. The allspice and cloves dominate alongside the vanilla, with the anise and ginger zinging away in the background…the spiced Extra should make an interesting Mai Tai. Very tasty, but I was curious to see what might happen with a lighter rum.

Enter Mount Gay Eclipse. Now, I should mention that I had never tasted Eclipse before I decided to spice it, and upon sipping, I was impressed. I’ll certainly echo Jason Wilson’s advice and say that Eclipse strikes me as a better rum (on its own) than Mount Gay Extra Old, but try a comparison for yourself. 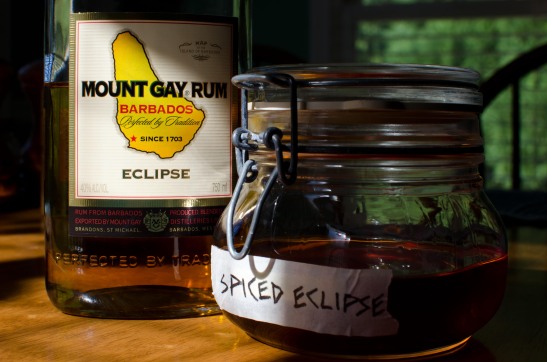 I ended up using half a bottle this time around so that I’d have some rum left to compare the spiced version to. The recipe was halved with the exception of the cinnamon and vanilla. What a difference! I think I prefer this rum to Appleton Extra, as far as spicing goes. The cinnamon dominates in this version…in fact, I think I’d cut it back in the future. It was strong enough that I added a second vanilla bean after filtering the rum the first time around, and I think that it rounded off the flavor enough to yield just the right amount of spice. The allspice and cloves were also reduced slightly. The recipe follows (though it does not differ significantly from Paul Clarke’s):

Combine everything in a large jar and seal. Keep in a cool, dark place for a couple of days, shaking it once a day to distribute the ingredients. Start tasting it after 48 hours; adjust ingredients if necessary. Once you think it’s done, strain through a coffee filter and bottle. A note on the vanilla: start with one bean first, and taste your rum. If lacking in vanilla, filter the rum and add the second vanilla bean. Filter again to remove any sediment.

So, how do these spiced rums compare with Captain Morgan? I bought a half-pint of it to compare, and the homemade guys win, hands-down. Captain Morgan is all vanilla extract on the nose, and it pretty much tastes like vanilla extract cut with alcohol, with maybe a hint of rum flavor, which is to be expected, considering its base is a Puerto Rican rum. It’s fairly mild, and fairly smooth, and it does combine well with Coke (making it taste like — surprise! — Vanilla Coke). I much prefer the spiced rum made with Mount Gay Eclipse, since it has more of that native rum flavor. I will say, however, that if you want a vanilla-heavy spiced rum similar to the Cap’n, you’ll have to cut back significantly on the other spices in your homemade infusions.

As far as commercial spiced rums go, check out Dr. Bamboo’s entertaining “un-review” of Captain Morgan, and be sure to look at Part One and Part Two of his spiced rum reviews. For a look at some of the newer spiced rums out there, which seem much better than their predecessors, check out Paul Clarke’s “Can Spiced Rum Be Serious?” post.

Finally, some spiced photos for your enjoyment!