Today we’ll take an in-depth look at the history and recipe of a particular cocktail: 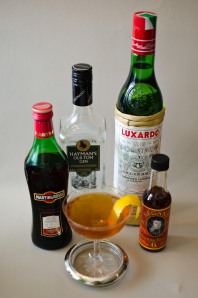 First, a bit of history.

Is it a precursor to the Martini? A cousin? A variation? And what about the Manhattan? The truth will likely never be known, though we can safely assume that the Martini and the Martinez emerged at about the same time. More specifically, they were developed in the late 1860s and into the 1870s, when vermouth became a common ingredient in American cocktails. First created in Italy (Cinzano in 1757, Carpano in 1786, Martini & Rossi in 1863), sweet vermouth, also known as “red” or “Italian” vermouth,was also the first to arrive on these shores; the Martini brand seems to have made up the majority of the import market, likely resulting in the King of Cocktails being named for it. “Dry” or “French” vermouth gained popularity just after the turn of the 20th century, resulting in bar-goers ordering “dry” or “perfect” cocktails, perfect meaning the drink held a blend of dry and sweet vermouths.

Still, there will always be room for debate on the origins of these cocktails. According to historian David Wondrich, theories surrounding the Martini/Martinez fall into two camps: the “martinez” group claims the drink(s) were invented in or near San Francisco, while the “Martine/Martini” theories call New York the home of the Martini. Wondrich has ruled out Jerry Thomas, the famed bartender of the late 1800s, as the inventor of the Martinez, noting that it appeared two years after his death in a later 1887 edition of his Bar-tenders Guide. The Martinez first appears, says Wondrich, in O.H. Byron’s 1884 Modern Bartender’s Guide, though without any mention of its origins. The Martinez may very well have emerged in the town of Martinez in California, spreading rapidly from bartender to bartender in the booming 1860s-70s San Francisco bar scene.

There was, however, a cocktail called the Turf Club that appeared in the anonymously-authored How To Mix Drinks–Bar-Keeper’s Handbook from 1884. The Turf Club, with the exception of maraschino liqueur, is essentially identical to the Martinez. Perhaps the addition of maraschino was a modification to make a “fancy” Martini or Turf Club. Dashes of maraschino, absinthe, or curaçao were frequently added to fancy up American cocktails. The Vermouth Cocktail, from 1869, adds bitters, maraschino, and a lemon twist to chilled vermouth, providing us with yet another alternative.

The first Martinez was almost definitely made with sweet vermouth and Old Tom gin, a sweeter, aged gin prevalent in the 1800s. Most likely, the Martinez was distinguished from a Martini by the addition of maraschino. It was also, according to Gary Regan, ordered as a kind of “gin Manhattan,” substituting gin for whiskey. Jason Wilson mentions the same, noting that Byron’s afore-mentioned Modern Bartender’s Guide gives the following direction for mixing a Martinez: “Same as a Manhattan, only you substitute gin for whisky.” The name, however, remains a mystery.

Enough history. On to the mixing!

We begin with an old version from the 1887 version of Jerry Thomas’s book:

Shake [stir!] thoroughly with two small lumps of ice and strain into a chilled cocktail glass. Garnish with a quarter slice of lemon added to the drink. Add two dashes [1/2 tsp] of gum syrup for an extra-sweet drink.

Here I used Hayman’s Old Tom Gin, Luxardo Maraschino, Regan’s Orange Bitters (Fee Brothers’ Old Aromatic would be a closer substitute for the defunct Boker’s), and Martini & Rossi sweet vermouth. Good, but the gin is heavily downplayed, as Hayman’s is somewhat mild and similar to Plymouth. Overall, the drink is too sweet for my taste, and the optional gomme syrup would put it way over the top. Jay Hepburn of Oh Gosh! seems to agree when he tested Hayman’s Old Tom. Perhaps if I had slipped that slice of lemon into the drink, rather than use a twist, it may have worked.

We continue on to variations mixed in the absence of Old Tom Gin:

Stir with ice and strain into a cocktail glass. Garnish with a lemon twist.

Nice. Boodles gin was used to pinch-hit for the Plymouth, and, being more juniper-forward, does a much better job of standing up to the vermouth. 5 ml of maraschino (1 tsp.) was used for accuracy, as it takes over drinks quickly; 2 dashes of Regan’s orange bitters were added. Watch him mix it up here, on the Cocktail Spirit.

Stir and strain into a chilled cocktail glass. Garnish with a lemon twist.

A simplified version more suited to modern taste, it would likely come out drier (I didn’t test this one, but feel free to!).

Shake and strain into a cocktail glass. Garnish with a lemon wedge.

A compromise based on the availability of ingredients in bars. I didn’t test this one either, as I would likely have to use Boodles as a substitute for the Tanqueray, but I imagine it would turn out close to the Mr. Boston and Playboy versions tried below, though with more spice, better balance, and more interesting flavors.

Stir with ice and strain into a chilled cocktail glass. Garnish with a maraschino cherry.

Here we see the adoption of triple sec/cointreau in lieu of maraschino, as Dale DeGroff (aka “King Cocktail”) recommended. Fitting, since he worked on Mr. Bsoton’s Platinum edition. DeGroff takes the better route with the maraschino and angostura. Mr.Boston’s comes out, well, mild and a bit bland. Plymouth and Noilly Prat Original Dry were used, with Cointreau and Regan’s Orange Bitters. A bit of the syrup from my homemade maraschino cherries lends a helping hand, but not enough of one. If you’re desperately trying to save this drink, perhaps some orange curaçao would be helpful to punch up the orang-ey sweetness.

Stir well with ice and strain into a chilled cocktail glass. “Martini men with a strain of Spanish in their veins go for this one. Alleged to have been the original martini.”

Probably contributing and/or continuing the Martinez, California’s claim to the drink, which was made in the 1950s. This is essentially a modified dry martini, in keeping with the theme of the Martinez being a precursor. Like the Mr. Boston version, a fairly uninteresting drink, though the maraschino helps quite a bit. Plymouth and NP were used again. I think I’ll stick with the sweet vermouth versions.

Stir with ice and strain into a chilled cocktail glass. Garnish with an orange (or lemon) twist.

So far, my favorite version. It stays true to tradition by making use of Old Tom and sweet vermouth, equaling out their proportions for better balance (this is the way to go for those who enjoy vermouth, but weren’t raised on it… I like the stuff, but not that much). All flavors are present. The maraschino is kept to a minimum, but 1/2 tsp. is ample enough to punch through the gin and vermouth without adding more of that cloying sweetness; its earthy cherry flavor seems to become more prevalent as you near the end of the drink. The orange bitters are working constantly in the background to help hold everything together.

Incidentally, the versions mixed by both Jamie Boudreau and Jay Hepburn match Jason Wilson’s. Rick Stutz of Kaiser Penguin, on a break from his Tiki mixing, also prefers this 1:1 ratio, using Carpano Antica for his sweet vermouth, which, unfortunately, I have not obtained yet. As far as bitters go, Jamie likes Hermes and Rick likes a dash each of Angostura Orange and Regan’s.

What’s that? Future variations that I would try? Well, the use of dual orange bitters intrigues me, as does the use of Ransom Old Tom (I’ve yet to open my bottle) or a genver (Boomsma young & old are in my inventory at the moment).

If you’re searching for an even greater number of Martinez recipes, check out Mixolopedia’s Martinez Comparison, the majority of the fighting being over specific vermouths and bitters. After all of that hard work, go mix yourself a Martinez!

UPDATE: August 29, 2011. This past Saturday I finally cracked open the Ransom Old Tom. The first thing it went into was a Martinez. Absolutely exquisite! Jason Wilson’s recipe was used, as were the M&R Sweet Vermouth and Regan’s Bitters. Thanks to Bruce Tanstaafl for the inspirational comment, and for friend Steve W. for tasting and enjoying the result!

5 comments on “Examined: The Martinez”