Last month, Imbibe ran a piece on Irish Whiskey that caught my attention, namely because I hadn’t tasted or mixed with very many Irish whiskeys. If you’ve paged through a large number of cocktail books, you’ll understand why — it’s just not used in cocktails very often. According to Imbibe the scene is changing, however, and more and more bartenders are experimenting with what was once the most popular spirit in the country.

As a result of the aforementioned article and a visit to the faux-Irish bar at the New York, New York Hotel in Las Vegas, the Hutch in the basement now has three Irish whiskeys added to its stockpile: Tullamore Dew (decent and mild), Bushmill’s Black Bush (a wonderful blend, a bit maltier, with a hint of sherry), and Redbreast 12-year (a great all-around single-malt). The one that’s been used most frequently as of late is the Black Bush, which is specifically called for in the following drink, the Wilde Heart. 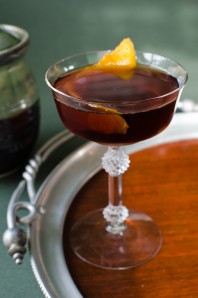 Stir with ice and strain into a cocktail glass. Garnish with an orange twist.

The Wilde Heart comes from Brandon Josie of 15 Romolo in San Francisco and is a wonderful mix of grain, bitterness, and sweetness. Despite its name, the drink is a gentle one, the CioCiaro being one of the less powerful Italian amari out there but quite a tasty one (I picked it up after seeing it poured into the Southern Cola at Holeman & Finch). What I love here is the use of Cherry Heering: it normally provides a powerful wallop of flavor that, while wonderful, tends to take over drinks. Plus, I rarely use it in anything except the Blood & Sand and the Singapore Sling*. In the Wilde Heart, it adds just enough fruity oomph to highlight the sherry-cask flavor of the Black Bush and the slight notes of fruit in the amaro. The hint of citrus oil from the orange twist completes the package. Says the 15 Romolo bar menu: “As dark and flamboyant as the author namesake.”

On the Wilde Heart: “The subtle depths of sherry cask-finished Black Bush whiskey is matched with the nutty richness of an Italian amaro, with cherry liqueur lending a plush sweetness.”

Redbreast: “Made with a combination of malted and unmalted barley, the single pot-still whiskeys from Redbreast are some of the best spirits coming out of Ireland. Redbreast 12-year-old is bold, with notes of honey, orange zest, and hazelnuts…”

If you’re a Manhattan drinker, give the Wilde Heart (or the Redbreast whiskey) a try and I think you’ll have a new drink for the Fall. For a few more classic Irish whiskey drinks, head over to 12 Bottle Bar’s drink menu and sift through their selection.

*PS: I couldn’t find the Original Singapore Sling recipe listed online, but Ted Haigh published it in “How the Sling was Slung” in Imbibe July/August 2011. The recipe follows:

Combine all ingredients except soda water and bitters in an ice-filled Collins glass. Top with soda, then dash the bitters on top. Garnish with either a thick lime spiral (a la the 1920s) or omit the Bénédictine and bitters and float sloe gin on top (a la the 1930s).

For a newer version, check out Robert Hess’s show, but I like the original version best; Beachbum Berry’s Singapore Sling  (? – 1950s), from Beachbum Berry Remixed, is also very good (up the gin to two ounces, reduce the Bénédictine to 1/2 ounce, add 1/2 ounce of brandy and omit the bitters, though they wouldn’t do any harm).