Cocktail Night VII: Sazeracs for All!

The quintessential New Orleans cocktail is, without a doubt, the Sazerac. In fact, it’s the city’s Official Cocktail. It was also the subject of our seventh cocktail night, being the host’s favorite drink. We mixed up two versions of it — one with rye, one with cognac — while offering a taste of absinthe to anyone who was curious. Overall, a rousing success, but it hasn’t been covered here on the blog yet, so here goes, the culmination of our New Orleans series! (Where’s the Ramos Fizz and the Milk Punch, you ask? Why, they’ve been covered already in previous posts, the Ramos with some companion fizzes and the Milk Punch in hot form.)

When it comes right down to it, the Sazerac is really a simple drink — the Big Easy’s take on the venerable Old-Fashioned. You’ll find many recipes for the Sazerac, all of which are extremely similar, but each with its own adherents. Many swear by the Napolean House recipe, which sticks to Old Overholt Rye, Pernod, and both Angostura and Peychaud’s bitters prepared in the traditional double-rocks glass manner, but here’s how I make mine: 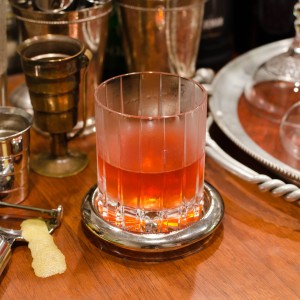 Absinthe spritz (use Pernod or Herbsaint  if necessary)
Lemon peel

Chill a rocks glass, preferably for 10 minutes or more in a freezer. Combine the whiskey, syrup, and bitters in a mixing glass, add lots of ice (which is as cold and dry as possible), and stir. With an atomizer, spritz the chilled rocks glass with absinthe 5 or 6 times, coating the sides and bottom of the glass. Strain the whiskey mixture into the glass, then express the oils of a lemon peel into the drink. Rub the rim with the peel, then discard it (some like the peel in the drink, so be sure to ask).

The recipe above is fairly traditional, but die-hard imbibers of Sazeracs will probably spot the differences. Many recipes call for chilling your serving glass with crushed ice (a “frappéd” glass) and mixing the drink in a second rocks glass, not a full-sized mixing glass. I get the sense that this was really just to save time behind the bar — in fact, as Wondrich reports, it was decidedly common to use “small bar glasses” for mixing. Regardless of how it’s done, both the drink and the serving glass should be chilled.

Second, sticklers for tradition use a sugar cube —  demerara or turbinado, if possible — for the sweetener, which is muddled in the mixing glass with a little bit of water. Jim Meehan, of PDT, prefers a bit of grit in the bottom, but I like my Sazeracs to be smooth, hence the syrup. I would say that a rich syrup wouldn’t hurt, and in fact may be an improvement because of the silky mouthfeel it provides. (About the above video: I would say skip to the middle for the Sazerac, but Meehan also mixes up a great Ramos Gin Fizz at the beginning.) A sugar cube may not have been used by late 19th-Century bartenders anyway, according to Erik Ellestad; more likely, gomme syrup would be pinch-hitting for gritty sugar (oh, and read through all of Erik’s February 2010 posts for a Sazerac-tasting extravaganza).

Thirdly, many simply rinse the glass with an absinthe substitute and dump the excess. I find that the absinthe or pastis tends to settle in the glass, so I prefer to use an atomizer for a more effective coating. Plus, I like the way the atomizer makes an absinthe vapor, producing a heady anise aroma that tends to spread around the room..a simple rinse just seems to sit there, relatively idle. Perhaps a more vigorous swirling, tossing the glass in the air with a spin, might do the trick (again, see Meehan’s video, above) — showy, but risky unless well-practiced.

On the ingredients: yes, the Sazerac was originally made with cognac, which makes a wonderfully smooth drink (as opposed to the rough and powerful, yet delicious, bonded Rittenhouse). Use a nice fruity cognac with some character — I like Camus VSOP, though I’ve read that Pierre Ferrand 1840 works quite well, being in the style of cognacs produced in its namesake year. Gary Regan, in The Joy of Mixology, prefers drier bottlings like Hennesy or Hine. Another wonderful formula, found in such tipples as the Saratoga, combines rye and cognac, taking off a bit of the edge and emphasizing the fruit notes while maintaining some spiciness. Bourbon does not suit the Sazerac, particularly — the flavor just doesn’t mix well with Peychaud’s and absinthe; you need a liquor with fruit and spice. If you use both kinds of bitters, go heavy on the Peychaud’s and light on the Angostura as the latter tends to take over the drink. Should you not use absinthe, Pernod will do, and Herbsaint is even better (this is the official drink of New Orleans, after all).

As for the history of the Sazerac, well, that can get about as muddled as the sugar cube in the bottom of the drink. Says David Wondrich, “the history of this drink is so intricate and entangled in myth that it requires a monograph of its own…I know this because the untangling of it I was originally planning to include [in Imbibe!] had already reached some sixteen pages with no sign of wrapping up when my editor wisely suggested I take a different tack.” Indeed. Still, there are some general points of its history that we can call well-accepted:

Well, there you have it! The Sazerac in a nutshell (or rather, an old-fashioned glass).

2 comments on “Cocktail Night VII: Sazeracs for All!”