That’s right folks, we’re Off, on the road, to Madison… 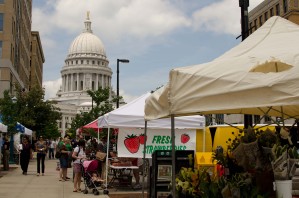 Well, technically, we’re already in here, in town for a wedding. I was lucky enough to come up earlier this year to do a little architectural and cocktailian snooping, which turned out extraordinarily well. Now, Madtown may be a Beertown, but that doesn’t mean the craft cocktail scene hasn’t arrived. There are currently two excellent bars making craft drinks up here in Cheeseland (and likely more in Milwaukee), and those are Merchant and Nostrano. I visited both when I was here in May and June, so of course I have to return and check up on ’em.

After parking downtown for the Concert on the Square last night (“Film Noir” scores, with a little Beethoven and James Bond thrown in for good measure), we headed across from the deck and into Merchant. The scene? Dark, cool, with a naturally-backlit bar, nifty industrial lighting, and a bit of chic-industrial décor. The bar is large enough to accommodate 4 bartenders and a bar-back when exceedingly busy, but at that point, Max was the only one behind the bar.

Merchant’s liquor stock and cocktail menu is excellent, varying with the seasons (currently it’s their summer menu) and using a large amount of house-made liqueurs and syrups, not mention a fantastic range of bitters and additives (including Bittercube, made locally, and Bitter Truth). While Dad perused “The Canon,” their menu of Classics, I glanced at their Originals. I usually try to sample craft bars’ more inventive drinks, since I’ve tasted many of the old standards (especially on Merchant’s summer list). I went with a refreshing take on the Pimm’s Cup:

Rinse a tall glass with Green Chartreuse. Shake the above ingredients with ice, add fresh ice to the rinsed glass, and pout the mixture in. Top with Gosling’s Ginger Beer and stir briefly to mix. Garnish with a slice of cucumber, a sprig of mint, and two orange wedges.

Very good. Death’s Door is a floral, American-style gin, distilled here in Madison by Yahara Bay using grain from Washington Island, Wisconsin. Combined with the Pimm’s, Menthe, and Lemon Juice, it makes for a light, refreshingly herbal drink, accented by the Bittercube Jamaican, which is redolent of allspice and a nice companion for the ginger beer. Gosling’s is a relatively smooth ginger beer, not nearly as bitey as something like Fentinman’s, but good. The Chartreuse makes up for the Gosling’s lack of bite, I think.

Dad decided to go with a Mai Tai, being the classic he always orders at a particular Thai restaurant in Aschaffenburg, Germany. It’s my favorite Tiki drink, and Merchant puts an interesting spin on it (nothing radical, don’t worry!).

Shake all the above and strain into a ice-filled double rocks glass. Garnish with a sprig of mint.

You might call it a Mai Tai Lite. The end result is smooth and floral, actually, with light citrus notes that I believe stem from the housemade orgeat (which is light, tasting of blanched almonds and fairly heavy on orange flower water) and curaçao, not as rich of a product as Marie Brizard’s. Still, I miss the depth and aged flavors of Beachbum Berry’s as-close-as-you-can-get-to-the-original-and-still-afford-it Mai Tai, made with Appleton Estate Extra 12-year and Rhum Clément VSOP, an unmatchable combination. Orgeat syrup is a whole other battle, one I’ve fought previously, and which I’ll post on shortly, though I will recommend Rick Stutz’s Pefect Orgeat Syrup recipe as the simplest and best-tasting. Fee’s is filled with too much of a citric acid flavor for a Mai Tai, so avoid it at all costs for this particular Tiki favorite.

At this point we were getting to know Max, the bartender, pretty well, particularly after finding out I’m an amateur mixer. I followed up with, “I’ll just have an Aviation,” (“Oh, just an Aviation!” was the reply) and he shook one up for me:

Shake with ice and strain into a coupe or cocktail glass. 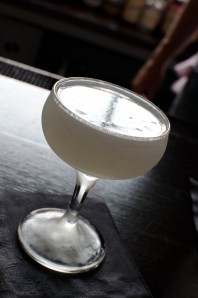 Good, as always. The proportions may have been 2:1:1:1, or maybe 4:2:2:1, not sure. Anyhow, I haven’t made one of these in a long, long time, and it’s interesting how the violette kind of hides in the background. Anyway, perusing the library stacked in the corner of the bar, in particular the Bar La Florida Cocktail book, Max decided he wanted to try a flip, never having tasted one before (it’s been a while for me, too).

Well, it’s a flip! It always amazes me how cream and eggs, or perhaps the nutmeg, seem to bring out the chocolate notes in brandy and cognac (Chalfonte, in particular). Enjoyable, this served as an appetizer to keep me going until dinner later that night; leg of lamb for me, the cheese platter for Dad, most enjoyable after the concert.